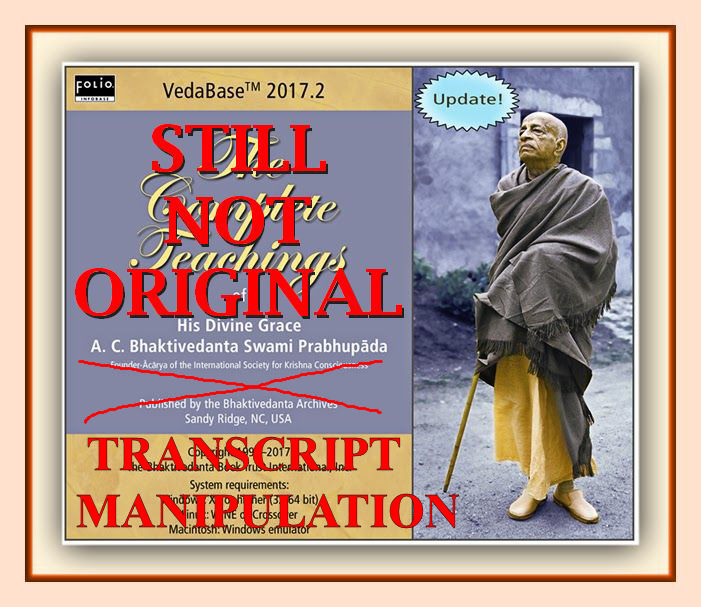 Vedabase involved in secretly changing the transcripts of Srila Prabhupada.

ATTENTION - BE EXTREMELY CAREFUL IF YOU USE THE FOLIO VEDABASE

FIRST THEY CHANGED THE BOOKS, NOW THEY ARE CHANGING THE VEDABASE FOLIO TO JUSTIFY THEIR MISLEADING CHANGES - EXPOSING THE TRANSCRIPT CHANGES: VEDABASE CLIPPING OUT SRILA PRABHUPADA'S SANSKRIT VERSES AND PUTTING IN THEIR OWN TRANSLATIONS

In the analysis below, original transcripts and changed transcripts are compared where they have cut out several small parts, and put their own concocted translations.

Comment by Mahesh Raja: Everyone KNOWS that Vedabase is controlled by Jayadvaita -  note at the bottom where it says "used with permission of BBTI".  Salary paid to lackeys eg Ranjit types etc.

1)  Srila Prabhupada gives this encouragement: Right from the beginning of my mission, I have always stressed and encouraged my disciples to work with the college students. You should not be discouraged if people are not coming to your meetings. We are trying to please Krishna. That is all. We simply must go on with our business, to the best of our ability. We must always sincerely try to do our best with great determination. This is the transcendental position. Success or failure, this is not our business. We leave that up to Krishna. My Guru Maharaja said, it does not matter if anyone comes to hear. You go on with your chanting. If no-one hears you the walls will hear. But this does not mean that we should sit down someplace and simply chant Hare Krishna for our own benefit. We should be always anxious to save the cripple minded people with the science of Krishna Consciousness. This is the position of a Vaisnava. Link to this page: https://prabhupadabooks.com/letters/sydney/february/15/1973/satsvarupa

SO WE HAVE TO EXPOSE THEM. THEY ARE NOT LEADER; THEY ARE JACKALS. SO JACKALS CANNOT ANYMORE RULE OVER. THAT SHOULD BE OUR PROPAGANDA

730503mw.la Conversations
Prabhupada: No, it is Sanskrit. And in Bengal it is called vane asiya raja.(?) “In the forest a jackal has become king.” They are like that. Nila-varna-srigalavat.(?) When… There is big story about this jackal. I will tell you some. A jackal came in the village and he fell in the tub where, what is called, the water? No, no. The water man keeps the water for dipping, making little bluish. For coloring. That blue, blue. So the washerman kept the dye water in a big tub, and the jackal fell in it. So jackal fell in it; he became blue, all blue. So he fled away, and all the animals said, “What is this animal? What is the animal? What is that animal? Oh?” All, even lion became surprised. “We have not seen this.” “So who are you, sir?” “I AM SENT BY GOD TO RULE OVER YOU.” “OH?” SO THEY BEGAN TO WORSHIP HIM AS GOD, AS LEADER. Then one day other jackals, they were crying, “Wa, wa,” but the jackals cannot stop. If others jackals cry, the jackal cannot stop. So he also began to “Wa, wa.” Oh, then, they, oh, this rascal is a jackal. Yavat kincin na bhasate. That these rascals are jackals. Now they are talking nonsense. We can detect that “Here is a jackal.” SO WE HAVE TO EXPOSE THEM. THEY ARE NOT LEADER; THEY ARE JACKALS. SO JACKALS CANNOT ANYMORE RULE OVER. THAT SHOULD BE OUR PROPAGANDA. NOT ONLY SCIENTIFIC, ALL POLITICAL THINGS, SOCIAL THINGS, EVERYTHING. THEY SHOULD BE ALL KICKED OUT. THEY SHOULD BE REPLACED BY KRSNA CONSCIOUSNESS. THEN PEOPLE WILL BE HAPPY. THIS SHOULD BE OUR PROGRAM. Our, this propaganda means to make people happy. It is not a business, to make business and take some money. And so many jackals have been arrested and resigned in your… You know that? Many jackals have been obliged to resign their post in the government.

731209SB.LA Lectures
So this Krsna consciousness movement is a challenge to all the rascals and fools, that’s all. SO THOSE WHO HAVE TAKEN THIS MOVEMENT VERY SERIOUSLY, THEY SHOULD BE VERY SOBER AND UNDERSTAND AT LEAST YOU MUST EXPOSE ALL THESE RASCALS. THAT WILL BE VERY MUCH APPRECIATED BY KRSNA. Thank you very much. (end)

“So you all write very strongly vehemently. Even it is a little offensive, still these rascals should be taught a lesson. Yes. They’re misleading. Godlessness.” (Conversations April 19, 1973)

721016SB.VRN Lectures
SO WHEN YOU BECOME ACTUALLY PREACHER OF GOD CONSCIOUSNESS, YOU CANNOT MAKE ANY COMPROMISE. YOU MUST CALL THE SPADE A SPADE. Just like Prahlada Maharaja. Prahlada Maharaja is one of the mahajanas. Out of the twelve mahajanas, he’s one of them. Because he was very bold. He was not afraid of his demonic father. He chastised him in so many ways. But he was never afraid. So just like our people are being persecuted in Australia. You know? They have been put into jail because they are preaching Hare Krsna. SO THIS IS NOT VERY EASY THING, EASY-GOING. MY GURU MAHARAJA, BHAKTISIDDHANTA SARASVATI GOSVAMI MAHARAJA, HE DID NOT LIKE THAT HIS DISCIPLES WOULD BE EASY-GOING, CHEAP VAISNAVA.

Note: BUT YOU HAVE TO FIGHT. THEN YOUR GURU MAHARAJA WILL BE GLORIFIED.

TRANSLATION - The great sages began to think that although a brāhmaṇa is peaceful and impartial because he is equal to everyone, it is still not his duty to neglect poor humans. By such neglect, a brāhmaṇa’s spiritual power diminishes, just as water kept in a cracked pot leaks out.

PURPORT -Brāhmaṇas, the topmost section of human society, are mostly devotees. They are generally unaware of the happenings within the material world because they are always busy in their activities for spiritual advancement. Nonetheless, when there is a calamity in human society, they cannot remain impartial. If they do not do something to relieve the distressed condition of human society, it is said that due to such neglect their spiritual knowledge diminishes. Almost all the sages go to the Himalayas for their personal benefit, but Prahlāda Mahārāja said that he did not want liberation alone. He decided to wait until he was able to deliver all the fallen souls of the world. Link to this page: https://prabhupadabooks.com/sb/4/14/41

Srila Prabhupada in many lectures said work "without attachment". Not with expectation of frutive results---- for for oneself:

TRANSLATION - Therefore, without being attached to the fruits of activities, one should act as a matter of duty; for by working without attachment, one attains the Supreme. Link to this page: https://prabhupadabooks.com/bg/3/19

TRANSLATION - The Blessed Lord said: One who is unattached to the fruits of his work and who works as he is obligated is in the renounced order of life, and he is the true mystic: not he who lights no fire and performs no work. Link to this page: https://prabhupadabooks.com/bg/6/1

Aside from that, - in the future the nuclear wars will be there. Satellites will be shot down by missiles - no internet, no digital currency etc but----- bullock cart--- will be there. Tiling the ground with bullocks. Farm projects:  Simple living high thinking----- was Srila Prabhupada's project. Cities will be destroyed.

With our age 60 plus----how long will we as tenants live in this body-- when the order comes---our karma with the body is finnished-----we have to vacate------best to serve Srila Prabhupada's order best as we can ---leave the result to Lord Krsna.

As Srila Prabhupada has said -- this changing of the books is serious situation-but who will listen anymore?