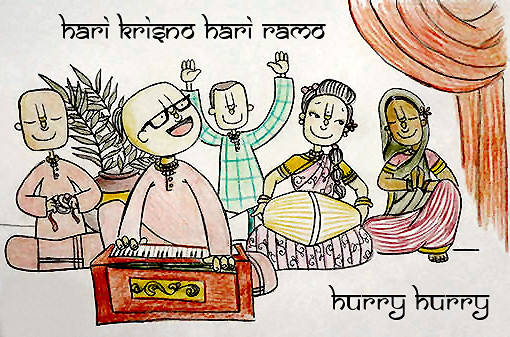 Srila Prabhupada: who is this ramo?

Who Is This Ramo?
By Palaka das

Many devotees within ISKCON are now chanting this Hare Krishno and Hare Ramo style of kirtans all around the world. Most simply follow what they are being shown by the leading men and think nothing of it. It’s become the norm as these kirtan leaders explain it away as nothing more than a simple Bengali pronunciation, so there is no harm. Yes, it is true that in Bengali language an “a” can sound like an “o”. However, this Hare Krishna maha-mantra is not a Bengali mantra, it is a Sanskrit mantra. Thus an “a” remains an “a” not an “o”.

Our founder acharya, Srila Prabhupada, also a native Bengali, does not chant this Hare Krishno, Hare Ramo Bengali style in any of his kirtans. Nor will we find any examples of this type of chanting in the multitude of his recordings. Neither in any of those same recordings do we hear his early followers respond back with anything other than Hare Krishna and Hare Rama. And on that extremely rare occasion where a disciple dared to deviate, Prabhupada quickly put an end to it.

In this connection, there is a not so publicized pastime which took place between Srila Prabhupada and his leading kirtan man, Vishnujana Swami, which now should be told.

Vishnujana Swami was singing the Hare Krsna mantra where he had deliberately changed Hare Rama to Hare Ramo because he had heard it being sung that way in India. When Srila Prabhupada noticed this change, he immediately stopped him by asking “Who is this Ramo?”.

I had heard this pastime told before, but I could not honestly write about it until I was certain I had traced it back as close to the original source as possible. After much research, I was lead to my old friend, Mahamuni das prabhu. When we finaly talked, it turned out Mahamuni prabhu personally heard this “Ramo” pastime directly from Vishnujana Swami himself. One day Vishnujana Swami was glorifying the Holy Name and revealing some of his realizations when he decided to shared this as well as other valuable instruction Srila Prabhupada personally gave him on chanting Hare Krishna.

For the record, Mahamuni prabhu was one of the bus drivers for Radha Damodara Traveling Sankirtana Party and had a close friendship with Vishnujana Swami. Those who knew Mahamuni prabhu will also know how he is very outspoken about changing Rama to Ramo especially when he hears it happening. Having been personally told this Ramo instruction by Vishnujana Swami, Mahamuni prabhu was one of the few devotees to speak out against it when it first was being introduced in ISKCON kirtans back in the 80’s. Thirty years later, we see it has reaching epidemic status primarily because most devotees just never heard what Srila Prabhupada had to say.

When we chant on our japa beads, we never chant Hare Krishno or Hare Ramo so why should we be chanting this way in kirtan, especially now since we know what Srila Prabhupada told his leading kirtan man, Vishnujana Swami?

Srila Prabhupada: "The easiest way is to chant the mahā-mantra: Hare Kṛṣṇa, Hare Kṛṣṇa, Kṛṣṇa Kṛṣṇa, Hare Hare/ Hare Rāma, Hare Rāma, Rāma Rāma, Hare Hare. Rāma and Kṛṣṇa are names of God, and Hare is the energy of God. So when we chant the mahā-mantra, we address God together with His energy. This energy is of two kinds, the spiritual and the material. At present we are in the clutches of the material energy. Therefore we pray to Kṛṣṇa that He may kindly deliver us from the service of the material energy and accept us into the service of the spiritual energy. That is our whole philosophy. Hare Kṛṣṇa means, "O energy of God, O Lord Kṛṣṇa, please engage me in Your devotional service." It is our nature to render service. Somehow or other we have come to the service of material things, but when this service is transformed into the service of the spiritual energy, then our life is perfect."

Comment by Aniruddhaji:
In regards to the proper pronunciation of the Maha-mantra I’d like to share an experience we had almost twenty years ago whilst doing a shoot for Lift Off, a children’s television show for the Australian national broadcaster. We were invited to chant on the show.

I recall Kesava was leading the kirtana and as is his want sometimes he chants Hare Ramo. We had only chanted a few mantras when the director called a stop to the kirtana. To our surprise he said, “What is this Hare Ramo? That’s not the chant. Everyone knows it is Hare Rama. Please chant properly.”

Not being particularly fond of chanting Hare Ramo, myself, I took it as Krsna’s arramgement that this person was representing Krsna and reminding us that we should chant the Maha-mantra properly following Prabhupada’s example. That is, Hare Rama not Ramo.

Comment by Pusta Krishna das:
Someday, the direct disciples of Srila Prabhupad will all have passed on, and so some of the direct advice which is not in his books will be lost…so, I want to share this with you. As Srila Prabhupad’s secretary and more than once in any case, I sat before Srila Prabhupad chanting my japa. Sometimes we hear people, and myself, saying “Hare Ram, Hare Ram, Ram Ram Hare Hare”. Srila Prabhupad would stop me and (more than once) say to me: “Chant the entire mantra” and he would proceed to do so. It is Ra-ma.

Why imitate Bengalis? The correct pronounciation is very important, only then the words have the meaning and the power.

Comment:
Yes, we should not make it a habit to say "Krsno" "Ramo" "Raadhaa-MudHUV", etc.

We should also not make a habit to say “Krsnaa” and “Raamaa”. In Sanskrt the short “a” is pronounced like “u” in “butter”, not like “o” in “mommy”. Often I hear devotees saying Krsnaa, which is a different word.

But actually we should not be sticklers about the pronunciation of others. I agree we should pronounce the Maha Mantra correctly, especially when we teach it to newbies. But ultimately it is more important to avoid offenses than to have perfect pronunciation.

I was looking at some old movies from the 1960s, and the devotees were saying “Kreeshna”. Actually even when I first started hearing about Hare Krsna, American devotees were still saying “Kreeshna” and they were known as the “Kreeshna People”. It seems funny to us now, but it still had the potency to spread the movement among the youth like wildfire in those days.

Many people from different parts of India have their own way of pronouncing. Many Northerners drop the final “a” to make it “Ram” (common) or sometimes even “Krsn” (less common). Some South Indians say something closer to “Krushna” or “Nrushimhadeva”. (And they may know Sanskrt very well).

But I agree with the article that there is a tendency for fads to develop, and if we start saying “Ram-o” too much, we might start hearing the mantra chanted that way more and more often. We should stick to Raama (with the short “a” at the end).