When all of the GBC members were in Vrindavana, Srila Prabhupada indicated that soon He would appoint some of His senior disciples to act as ritvik represen- tative of the acarya, for the purpose of performing initiations.   Click to enlarge

The newly initiated devotees are disciples of His Divine Grace A.C. Bhaktivedanta Swami Prabhupad, the above eleven senior devotees acting as His representative. After the Temple President receives a letter from these representatives giving the spiritual name or the thread, he can perform the fire yajna in the temple as was being done before.

Srila Prabhupada's letter of July 9th, 1977 addressed to all temples presidents and GBC's is the final instruction on the subject of future initiations/gurus in ISKCON after Prabhupada leaves his body. 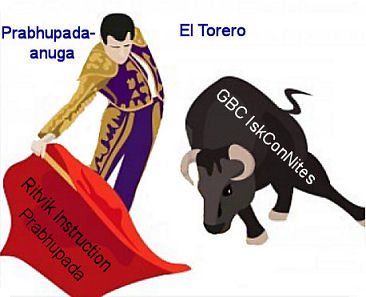 Srila Prabhupada appointed some of His senior disciples disciples to act as ritvik representative of the acarya, for the purpose of performing initiations.

"The name of a newly initiated disciple should
be sent by the representative who has accepted him or her to Srila Prabhupada, to be included in His Divine Grace's "Initiated Disciples" book."
» more «

Iskcon GBC Resolution 304 states: "Whereas the doctrine that Srila Prabhupada desired to continue to act as diksa-guru after his departure from this world, and did not desire any of his disciples to give diksa, or initiation, in succession after him is an errant philosophical deviation (known as ritvikism); and Whereas ritvikism directly contradicts the principle of parampara.

No, Srila Prabhupada is the Guru of the whole Hare Krishna, Iskcon society. To call Him or his disciples, who follow his instructions, "Ritvikist" or "Ritvikvadis" is a great offence to Srila Prabhupada and his movement. These desig- nations (Ritvikist, Ritvikvadis) are concoctions of words, of those bogus gurus and devotees who are antagonistic against Srila Prabhupadas instruction to act as His ritvik representatives.

"Since Srila Prabhupada Himself introduced the term "Ritvik", it is very offensive to Srila Prabhu- pada, to denounce His words. The attempt of Iskcon GBC to degrade the transcendental Vedic term "rtvijah" or "ritvik" to a derogatory word is one more example of offenses that have entered iskcon due to the neglect of Srila Prabhupada's instruction."

Even the Beatles were prophetically
preaching the Ritvik philosophy in
codes now decoded for you:

We are the Ritviks
(I am the Walrus)

Set them free
(Let it be)

My Field of Weeds
(Strawberry Fields)

Srila Prabhupada wrote a signed instruction on July 9th 1977 stipulating that all future initiations of those persons drawn to his teachings after his departure should be performed by ritvik initiators and that all who are initiated in this way would be considered his disciples under his personal guidance and protection.

The other crucial direct and indirect instruction given by Srila Prabhupada is to avoid intimate association with those who would come forward after his departure and attempt to cut ones faith in his personal order and thus cut off ones real lifeline and connection to his eternal spiritual presence.

We affirm that A.C. Bhaktividanta Swami Prabhupada is our Diksha and Shiksha guru by virtue of his personal order to become his disciple and be instructed by him through his books.

We affirm that anyone who criticizes, or finds fault with this method of diksha by the order of the Acarya and shiksa by way of his books should be avoided and placed at a respectful distance from one trying to advance in spiritual life under his divine guidance.

We affirm that only those who are to be worshiped and respected as perfected saints are those already listed by A.C. Bhaktivindanta Srila Prabhupada and unanimously agreed upon by the majority of vaishnava societies as genuine eternal associates.

Reporter: Who will succeed you when you die?
Srila Prabhupada: I will never die! I will live forever from my books and you will utilise.
If I depart there is no cause for lamentation. I will always be with you through my books and orders.
I will always remain with you in that way. Whether I am present or not does not matter.

Devotee: Srila Prabhupada when you're not present with us, how is it possible to receive instructions? For example in questions that may arise...

Srila Prabhupada: In my books the philosophy of Krishna Consciousness is explained fully so if there is anything you do not understand, then you simply have to read again and again. By reading daily the knowledge will be revealed to you and by this process your spiritual life will develop.

Srila Prabhupada: "GBC does not mean to control a center. GBC means to see that the activities of a center go on nicely. I do not know why Tamal is exercising his ‘absolute authority.’ That is not the business of GBC. The president, treasurer, and secretary are responsible for managing the center. GBC is to see that things are going nicely but not to exert absolute authority. That is not in the power of GBC. Tamal should not do like that. The GBC men cannot impose anything on the men of a center without consulting all of the GBC members first. A GBC member cannot go beyond the jurisdiction of his power."– Letter to Girirāj, 8-12-71 (emphasis added)

Srila Prabhupada: "I am the Spiritual Master of this institution, and ALL the members of the Society, they're supposed to be MY disciples. They follow the rules and regulations which I ask them to follow, and they are INITIATED BY ME spiritually" - (Srila Prabhupada Radio Interview, 12 March 1968, San Francisco)

Srila Prabhupada: "I wish that each and every branch shall keep their separate identity and cooperate keeping the acharya in the center. On this principle we can open any number of branches all over the world. The Rama Krishna mission works on this principle and thus as an organization they have done wonderfully." (letter 11th Feb. 1967)

Srila Prabhupada: He [Srila Bhaktisiddhanta Saraswati Goswami Maharaja] never recommended anyone to be acharya of the Gaudiya Math.... If Guru Maharaja could have seen someone who was qualified at that time to be acharya, he would have mentioned. Because on the night before he passed away he talked of so many things, but never mentioned an acharya. Therefore we may not commit the same mistake in our ISKCON camp. (Srila Prabhupada, letter to Rupanuga das, April 28, 1974)

Srila Prabhupada: Don't be allured by cheap disciples. Go on steadfastly to render service first. If you immediately become guru, then the service activities will be stopped; and as there are so many cheap gurus and cheap disciples, without any substantial knowledge, and manufacturing new sampradayas, and with service activities stopped, and all spiritual progress choked up. (SPL (VI 1987) 68.8.17)

Srila Prabhupada: We haven't got to manufacture. To manufacture ideas is troublesome. Why should we take the trouble? And as soon as you want to manufacture something to my...., that is DANGEROUS. ...That you are singing every day, "what our guru has said, that is our life and soul." ...As soon as this POISON will come -suppress guru and I become Brahman- everything FINISHED. Spiritual life is finished. Gaudiya Matha finished, ...VIOLATED the orders of Guru Maharaja.

...And as soon as you manufacture, fall down. This manufacturing idea is very, very dangerous in spiritual life. ...Our mission is to serve bhakta visesa and live with devotees. NOT THAT YOU TAKE THE PLACE OF GURU. THAT IS NONSENSE, VERY DANGEROUS. Then everything will be spoiled. As soon as you become AMBITIOUS to TAKE THE PLACE of GURU-gurusuh nara matih. That is MATERIAL DISEASE. » Srila Prabhupada conversations «

Srila Prabhupada: "I am practically seeing that as soon as they, our students, begin to learn a little Sanskrit, they immediately feel they have become more than their guru. Then the policy is to kill their guru and become guru themselves". "As soon as he learns that Guru Maharaj is dead, now I am so advanced I can kill guru and become guru. Then he is finished." (Srila Prabhupada 1976).

PRABHUPADA: SO THEY MAY KILL ME ALSO

Prabhupada: This is our position. Gradually they will show Hare Krsna movement. In India also, although India's... They will want to crush down this movement. So this will be up to Him. Krsna or Krsna's movement, the same thing. And Krsna was attempted to be killed by Kamsa class of men and his company, the demons. So it will be there; it is already there. Don't be disappointed, because that is the meaning that it is successful. Krsna's favor is there, because Krsna and Krsna's movement is not different, nondiff..., identical. So as Krsna was attempted to be killed, many, many years before He appeared... At eighth child, if the mother produces child yearly, still ten years, eight years before His birth, the mother was to be attempted to be killed. So there may be attempt like that. And Lord Jesus Christ was killed. So they may kill me also. (S.P.Room Conversation May 3, 1976, Honolulu) Note: Srila Prabhupada says there may be an attempt to kill him or his movement. If we look earlier in the conversation he actually says the attempt will be there.

THERE IS NOTHING ASTONISHING ABOUT THIS, THE DEMONIAC CAN KILL ANYONE FOR THEIR NEFARIOUS AMBITIONS

This action of Kamsa is not very difficult to understand. There are many instances in the history of the world of persons in the royal order who have killed father, brother, or a whole family and friends for the satisfaction of their ambitions. There is nothing astonishing about this, for the demoniac can kill anyone for their nefarious ambitions. (KRSNA BOOK CHAPTER ONE- Advent of Lord Krsna)

Srila Prabhupada: the may kill me

"So there may be attempt like that. And Lord Jesus Christ was killed. So they may kill me also. So it will be there; it is already there" "Someone says that I've been poisoned. It is possible." (S.P.Room Convers. May 3, 1976, Honolulu and Nov. 9, 1977, Vrindavana)

Srila Prabhupada: "someone has poisoned me." ( S.P.Room Conversation November 10, 1977, Vrndavana )

The demoniac have killed our eternal father Srila Prabhupada and his ISKCON family for the satisfaction of their ambitions. There is nothing astonishing about this for the demoniac can kill anyone for their nefarious ambitions. They are now in the process of killing him again by changing the divine message contained in his original transcendental books. Even though we may have to face many dangers, let us fight to save Srila Prabhupada's pure instructions, which are no different than himself.

We cannot reform Iskcons demoniac elements, and we might not have the power to start a new mission, but we just have to work together to keep Srila Prabhupada in the center as the Acarya, and see to it that his original pre 1977 Books are printed and distributed.