(response to Akruranath’s article Hansadutta Distorts History) Sometime in 1990, we published a Chinese Gita in Singapore when BBT refused to sell us books. In 1992, BBTI launched a copyright infringement suit against Bhima in Singapore. From the outset, Bhima responded, First show proof that you own the copyrights.) - Hansadutta das 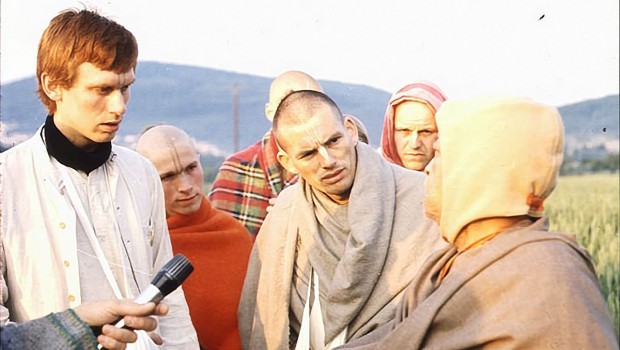 After several years of due legal process and much expenditure, at last came the moment when affidavits of “evidence in chief” were exchanged, and when BBTI learned that Bhima’s defence relied on having received permission to publish from Hansadutta, a BBT trustee appointed for life by Srila Prabhupada, they withdrew the Singapore court case at once, and immediately filed a new complaint in Los Angeles against Hansadutta.

Akruranath came up with the ingenious device that Srila Prabhupada never at any time owned the copyrights to his books, that the books were “WORKS FOR HIRE”, meaning that Srila Prabhupada was ISKCON’s hired worker. Paper, pencils and office space were supplied by ISKCON, and whatever was produced by Srila Prabhupada belonged to ISKCON. By this reasoning, Srila Prabhupada had no right to claim copyright to his works and invest them in the BBT, and moreover, the BBT did not exist, and therefore Hansadutta’s claim to be a BBT trustee was meaningless.

ISKCON GBC and BBTI directors accepted Akruranath’s legal counsel and submitted declarations that it was so. But the Judge did not see it that way, and thus BBTI made a hasty retreat to settle the case by awarding a license, and a substantial monetary award.

This lawsuit SHOULD NEVER HAVE HAPPENED in the first place. It could have been avoided had ISKCON and BBTI simply sold some books to the devotees, which is after all the whole purpose Srila Prabhupada intended when forming ISKCON and the BBT: Selling books–HIS books, Srila Prabhupada’s books.

Where this law suit did not succeed, it did succeed on the other hand to uncover and highlight illegal practices that ISKCON and BBTI had been doing for so many years, namely converting the assets (Srila Prabhupada’s copyrighted works) of a legally registered and funded trust, the Bhaktivedanta Book Trust, into a for-profit buisness corporation (BBTI), editing the works without legal authority, and distributing them as originals–all of which were illegal activities. Because of this and other illegal practices that came to light in connection with the misuse of the BBT and its copyrighted properties, along with legal documents filed in the course of litigating this case, I feel it is next to impossible for BBTI to prevail in any attempt to enforce copyright protection on anyone, anywhere, anytime.

Really, they have shot themselves in the foot. As this response is being written, there are numerous entities engaged in publishing Srila Prabhupada’s books and audio material. Why does the BBTI not file a copyright infringement case against them and stop them as they attempted to do with me? In Singapore we printed a small run of Chinese Bhagavad-gitas. Today there are individuals openly printing and advertising on the internet, “Macmillan” Bhagavad-gitas, CD’s, and art works. Why does the BBTI not chase after them and prosecute them for copyright infringement? BBT’s business should be selling books, not changing books.

At any rate, Akruranath has not set the record straight, but fudged the record more than it was before. By the way, Akruranath was dismissed from the case when ISKCON finally woke up to the fiasco into which he led them, at which point Amarendra das had to pick up the pieces and make a settlement.

Contrary to Akruranath’s assertion that “This case was not about book changes”, those involved know that one of the most stubbornly contended points for reaching a settlement agreement was complete freedom to publish all of Srila Prabhupada’s pre-1977 editions of his books, art work and music. The other directors finally overruled Jayadvaita Swami’s vehement opposition, and this controversial point became the cornerstone of what we are seeing today in the way of a renaissance in the publication of Srila Prabhupada’s original books.

What seems clear, after all is said and done, is that if BBT does not publish Srila Prabhupada’s original Books, someone out there will, and there is nothing to stop them.

What follows are Jayadvaita’s own words of apology for the lawsuit in different postings after the settlement. They were much appreciated then, and I think the readers will appreciate them today, and understand the situation more clearly. At the time of settlement, there was a very amiable and spiritually surcharged atmosphere amongst the previously warring parties. I think Jayadvaita’s own words make that clear. It was nothing like Akruranath’s version.

“From its very inception, this unfortunate case against Hansadutta was an anomaly and a travesty. Were not such court battles which pitted one devotee against another utterly an anathema to Srila Prabhupada? And especially when it would come at the cost of precious BBT funds? Can anyone doubt for a moment that Prabhupada would be extremely displeased by this manner of infighting?”

To Bhima he wrote:

“We feel that we owe apologies not only to you but also to Srila Prabhupada himself, and to his society of devotees. What ought to have been settled carefully and smartly when it was still a small dispute we allowed to turn instead into a long, acrimonious, and expensive battle, disturbing to all. We should have done whatever required to avoid this. The fault was ours.”

An afterthought: What I cannot understand to this day is why BBTI still insists on publishing the unnecessarily edited writings of Srila Prabhupada. Why Jayadvaita doesn’t get the point? Why ISKCON/BBTI, after so much money (at least a million dollars, give or take ), time and grief, they still only begrudgingly squeeze out some original unedited publications? What’s wrong with Srila Prabhupada’s books as they are? I really do not understand the logic behind this policy of tampering with the writings of Srila Prabhupada. Please enlighten me. I still haven’t got the point. — Hansadutta das - (END)

Answer to Hansadutta: first, they are demoniac Kali-yuga chelas, disguised as devotees; and second, they are afraid of of loosing their guru-ships by allowing Prabhupadas original books!

Srila Prabhupada: The whole situation has been spoiled by these so-called rascal gurus who gives his own opinion. This is our plain declaration: Let any rascal guru come. We can convince him that he is not guru, because he is speaking differently....So guru is one. Guru cannot be two. As soon as you find two opinions of guru, either both of them are rascals, or one is still at least rascal. (Lecture: What is a Guru? London, August 22, 1973)

"There are many jealous people in the dress of Vaishnavas in this Krishna Consciousness movement, and they should be completely neglected. A false acarya may try to override a vaishnava by a high-court decision, (2/3 hand vote) but Bhaktivinoda Thakura says that he is nothing but a disciple of Kali-yuga.".

"Bhaktivinoda Thakura says, Kali-cela. He indicates that there are other Vaishnavas, pseudo-Vaishnavas, with tilaka on their nose and kunti beads around their neck. Such a pseudo-Vaishnava associates with money and women and is jealous of successful Vaishnavas. Although passing for a Vaishnava, his only business is earning money in the dress of a Vaishnava". (CC.Madhy.,Ch.1, Text 218 / 220, purport)