Krsnacandra Dasa – Vrndavan: Whatever happened to the ISKCON society that was incorporated in Bombay? This Society is distinct from the West Bengal Incorporated ISKCON Society that is commonly referred to as the GBC.

ISKCON Bombay was, I believe, incorporated in 1979 but I am not sure if this was the date that the papers were actually filed as it is not clear on the document itself.

No matter, this ‘Society’ was founded and its headquarters were in the Juhu Temple. It appears from the “rules and regulations” that are laid out in the document that it was set up to be the ISKCON Societies Branch in India and Bombay was the perfect choice as Srila Prabhupada did consider it his “Office”. However, for some reason this Society was shelved and ISKCON was incorporated in West Bengal.

The ‘affairs’ of the Bombay ISKCON Society were to be governed by a Governing Council consisting of not more than 25 members and not less than 5. This governing council was also to be called the Council (Bureau) of the Society. The original members were:

West Bengal ISKCON went on to establish Regional Governing Bodies throughout the International Society of ISKCON so where does this ISKCON Bureau fit? Or is it defunct?

One of the main issues that many devotees have with ISKCON is the clandestine and convoluted corporate structure that has evolved since Srila Prabhupada entered into Samadhi. The general devotee has no idea of the true history of our society once Srila Prabhupada entered into Samadhi which is rather disturbing because our Society is supposed to be a Brahminical Society, however, transparency, truthfulness and integrity are severely lacking in our upper echelon.

Yet this very same upper echelon is primarily concerned in delving into the activities of its members and finding out the precise details of every single aspect of their devotional lives and movements within the Society and controlling them with rules and regulations and centralization equivalent to a Communist State.

It is not common knowledge that in ISKCON India for many years now there has been an internal struggle with the West Bengal GBC and the Indian Regional Governing Body (RGB) whose members are primarily Temple Presidents who believe that the non Indian involvement in internal ISKCON India’s affairs is not appropriate.

This year’s GBC meetings in Mayapur (2011) found the Indian Regional Governing Body (RGB) attempting to challenge the meddling / involvement of the West Bengal GBC in their internal affairs, but their efforts were given a royal GBC thrashing.  Of course this will never be admitted to or published in any report of the GBC meetings as is the case with many subcommittee / special meetings that are convened to discuss confidential issues, policies and plans.

However, the RGB and certain elements within the West Bengal GBC were not satisfied with the outcome of the last GBC meetings regarding the RGB’s challenge and a ‘little birdie’ told me that we may see a resurrection of the ISKCON Bureau in the near future as a reaction to this. The birdie claims that they are already beginning to ‘assimilate’ the RGB of India. The precise details perhaps will never be announced or known.

Should the Bombay GBC or Bureau be reconstituted then what will happen to our International Society for Krsna Consciousness? Should a fracture occur would this be advantageous for our Society? Or would this simply be a power play of individuals who want the bigger slice of the ISKCON pie?

The only thing that I find disturbing in the official registration documentation of ISKCON Bombay is the lack of spiritual purpose. Nowhere is Srila Prabhupada’s name mentioned, so this could be any number of random generic Societies which are being relentlessly created in India, the only difference is that it goes by the name of ISKCON.

The fact that Srila Prabhupada’s name is not mentioned goes directly against the expressed instructions of Srila Prabhupada in the matter: refer “To Most Urgency” Document (http://prabhupadavision.com/official-iskcon-documents/) which clearly states that “and his name and title must appear on all documents, letterheads, publications, and buildings of the Society.” Top Most Urgency – July 22, 1974

Sadly the individuals who incorporated ISKCON in Bombay failed to honour this edict by their Guru Srila Prabhupada as there is no mention of him anywhere to be found in this document… The only way one could understand that this Society has any connection to Gaudiya Vaisnava spiritual activities is the title ‘International Society for Krishna Consciousness.’

I suppose that is the same for the West Bengal ISKCON who are modernist corporate jockeys hell bent on religious syncretism and the usurping of Srila Prabhupada at any opportunity they can get.

Yours in the service of Srila Prabhupada
Krsnacandra Dasa 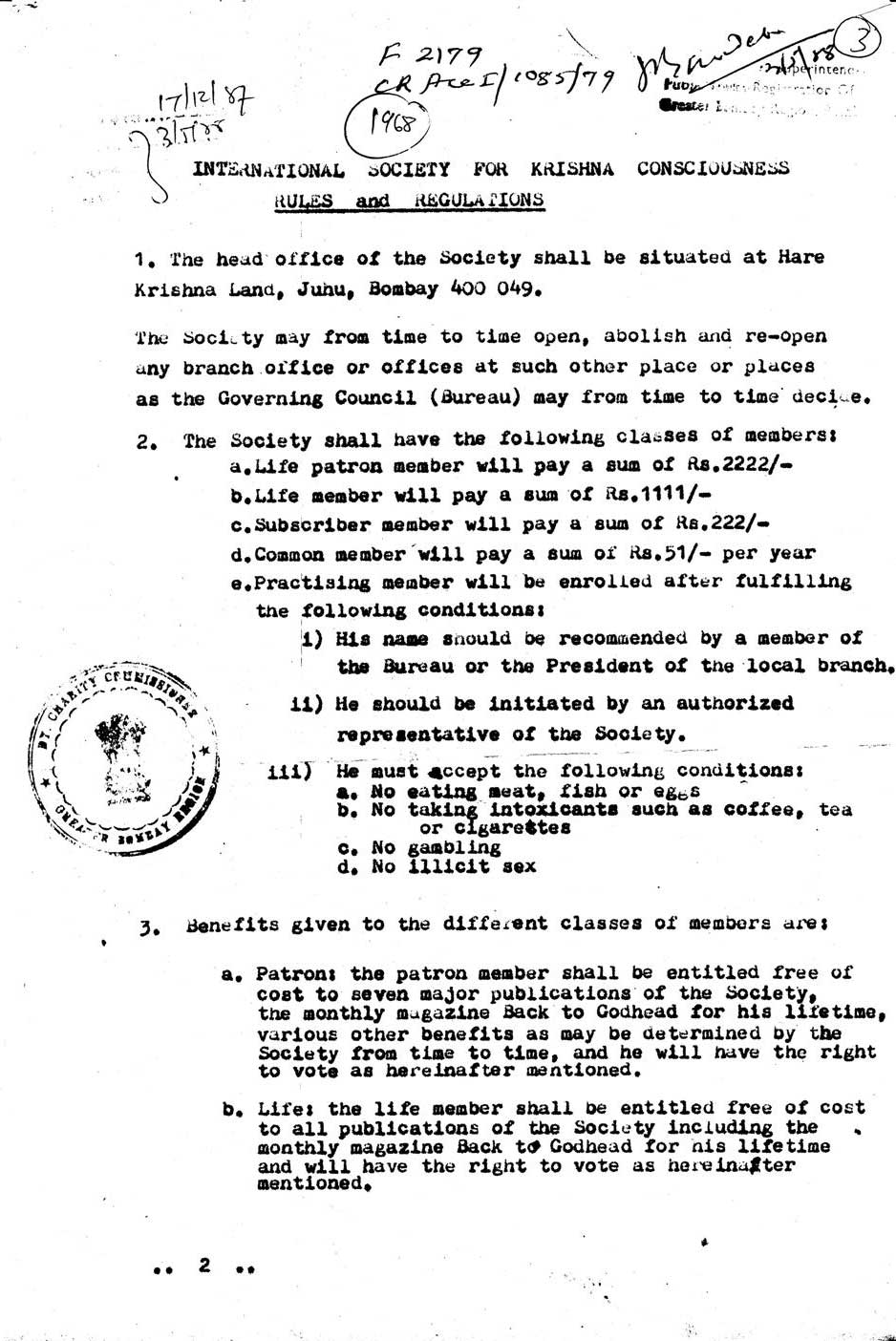 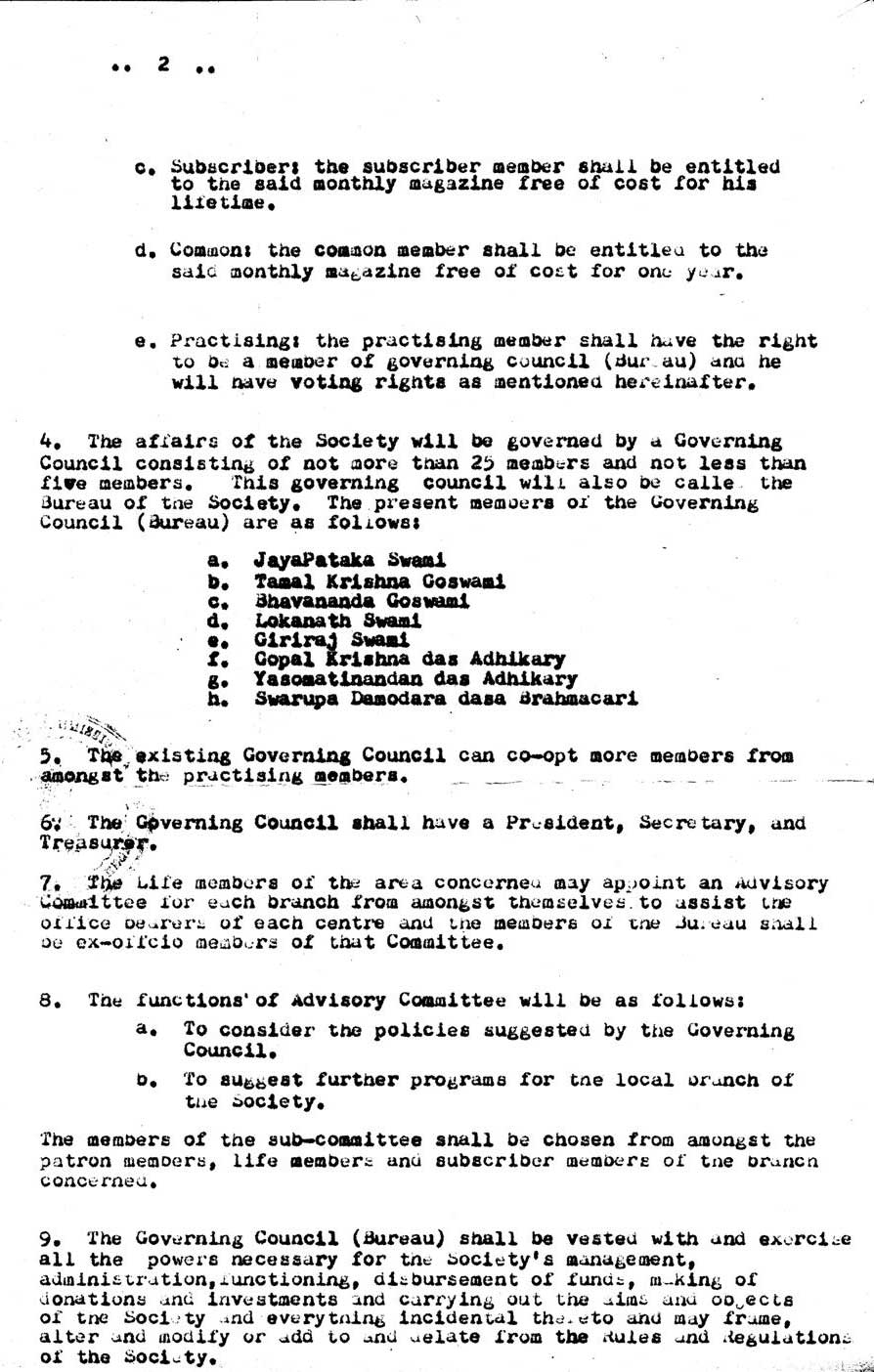 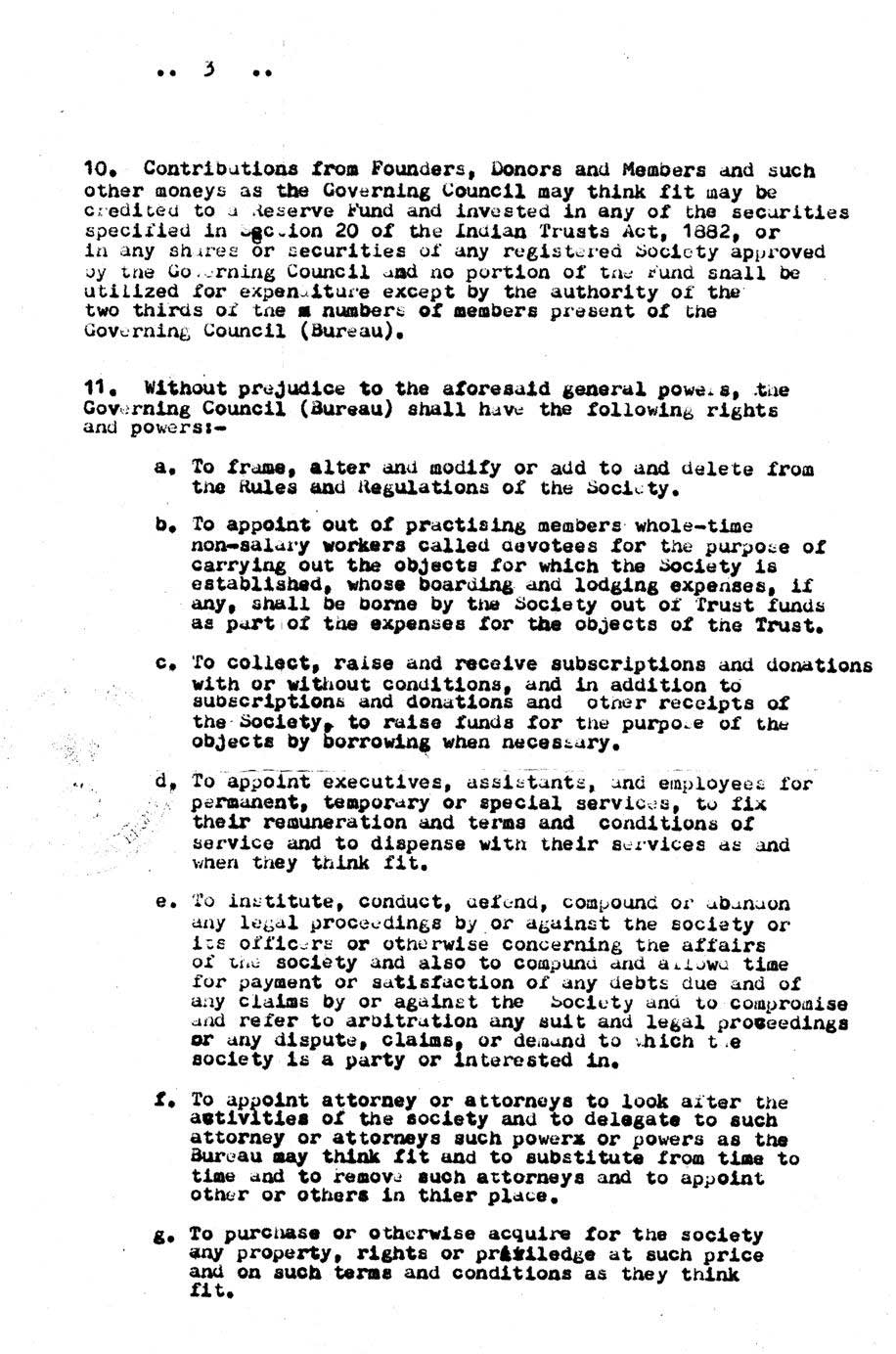 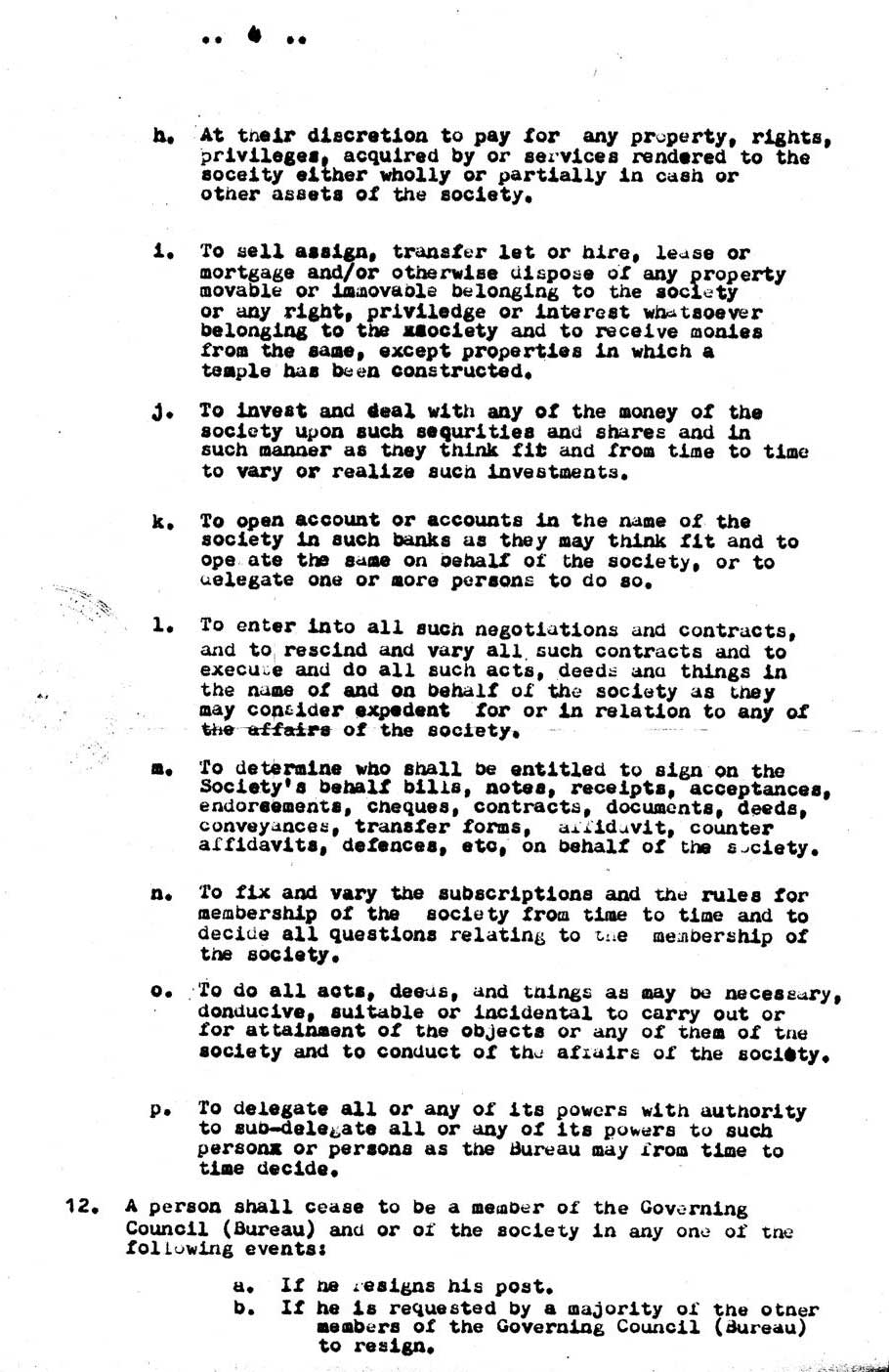 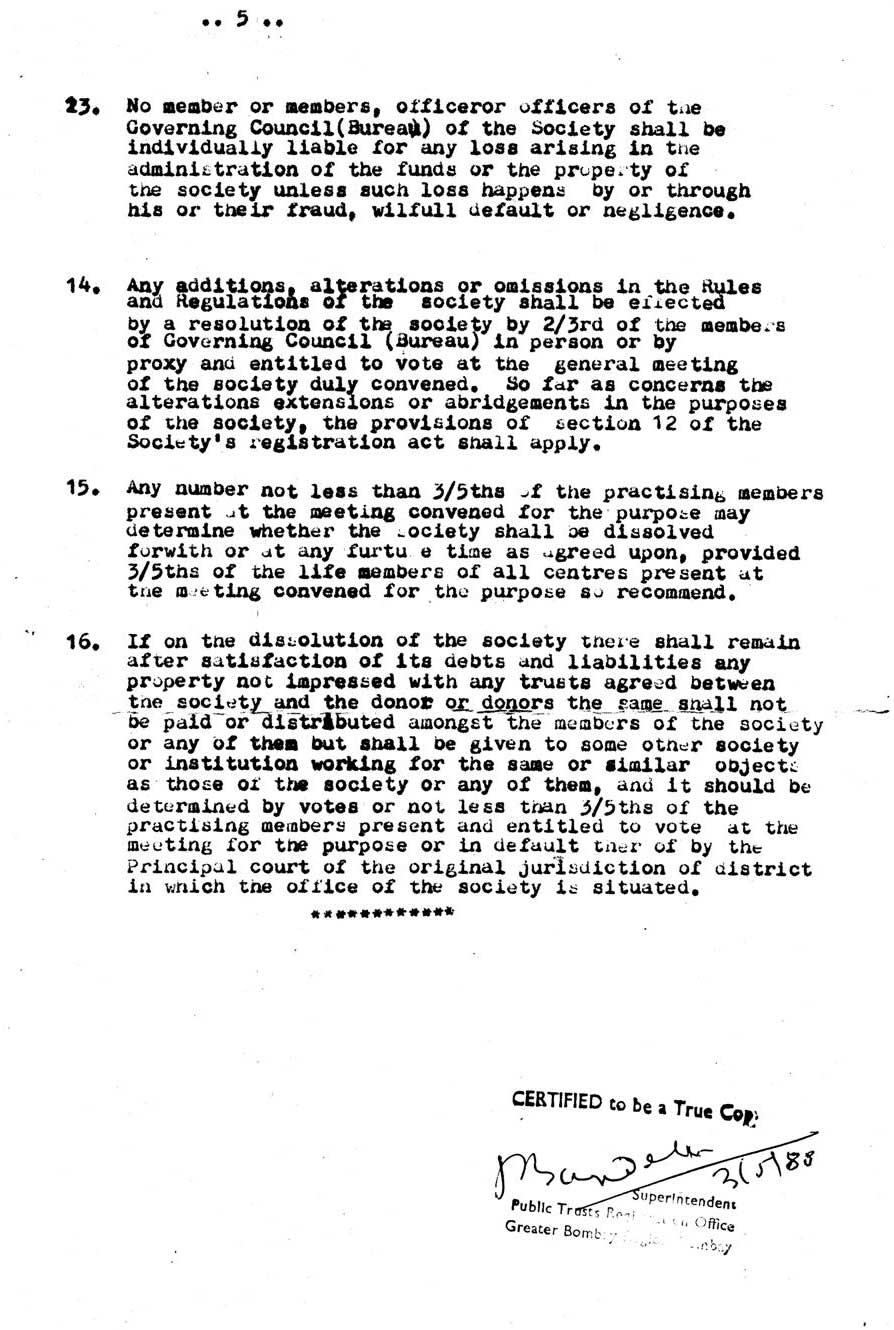