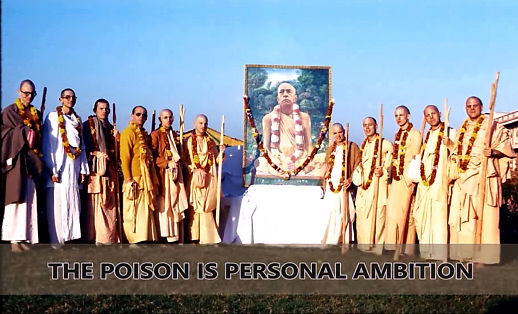 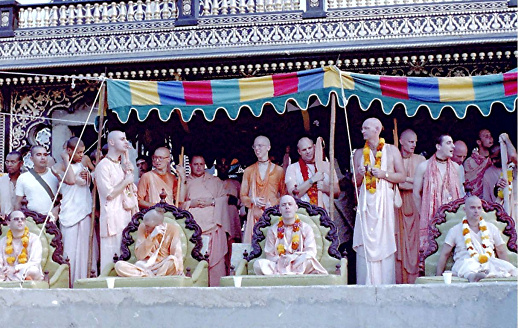 
Usurping the Seat of Acharya

As an initiated disciple of His Divine Grace A.C. Bhaktivedanta Swami Prabhupada and as a member of the International Society for Krishna consciousness, I herewith call to account your past and present preaching activities. Don't think that you are beyond accountability, because of your status as a Swami. Every devotee is accountable before his guru, and in the name of our spiritual master, I herewith demand that accountability from you. You are charged with heavily deviating from Srila Prabhupadas teachings. You, Tamal Krishna Maharaj, along with the other self-appointed gurus and their sub-appointees, are preaching bogus philosophy, such as the "current link philosophy", in support of "voted in successor acaryas", with a "less then liberated guru thesis" and a "minimum qualification theory", for adapting your "homosexual pedophile guru lineage" of conditioned souls into the pure guru-parampara.

You, Tamal Krishna Goswami, along with the others, have also changed Srila Prabhupadas original books, tapes, letters and translations, without any authorization, just to adapt your bogus philosophy for controlling ISKCON at large and the devotees in general, thus perverting Iskcon and creating havoc in our society.

Over the years you and your sub-appointees have also created a totalitarian guru clique, militantly and violently enforcing your own worship and orchestrating the banning, beating, shooting and killing of devotees who dissent to your cult ritualistic worship of conditioned souls and homosexual gurus.

The following is my personal charge against you Tamal Krishna Goswami (TKG): I personally hold you, TKG, responsible for the present chaos in our society, because you started it all, way back when Srila Prabhupada left his body. After his disappearance, you wasted no time to proclaim yourself as his sole successor-acarya in Bombay. Initially you even had a Vyasasana built for yourself in the Juhu Beach Temple and it was bigger than Srila Prabhupada's.

You also told all of your god brothers that the only way to approach Srila Prabhupada was through you alone, since you had become his sole successor. However, when your god brothers protested, and you could not pull through the hoax of the sole successor acarya, you then devised another, even better hoax, namely the scheme of the "THE ONE WITH THE TEN". Now the "TEN OTHERS" did exactly the same as "THE ONE" did before them, namely claiming to be Prabhupad appointed successor acaryas with the special status of being "exclusive-links". Now your new scheme was well accepted by the other ten. Now your new hoax was supported by eleven instead of one, which makes it very difficult to be exposed.

So I was forced to offer my flowers first to the eleven Vyasasanas, occupied with the new puffed up successors, before finally reaching S.P. 's seat. By that time I was not able to offer Srila Prabhupad the same flowers I was forced to offer first to my own god brothers, usurping the seat of acarya and demanding equal worship.

How disgusting I felt and how much my soul was hurt, no body knows. Except Hansadutta, no one of you ten usurpers has ever asked for forgiveness for this heavy guru-aparadhas of equal worship. Even up to date you have your pictures worshipped on Srila Prabhupada's altar. Why are you trying to drag Srila Prabhupada down to your level of conditioning? It is remarkable how you, TKG, switched from the "sole successor hoax" to the even better hoax of "THE ONE WITH THE TEN" and how "THE TEN" played along with you, the one and only.

Therefore the ten other self appointed gurus, of whom five remain, are as guilty as you TKG, because they actively supported you in the setup of a bogus guru system, for the mutual agreement of exploiting each others zones and disciples, thus plundering Srila Prabhupada's legacy. For your audacious claim you even misinterpreted Srila Prabhupadas rittvik letter, to suit your needs.

However, in the Topanga Canyon conversation you have said: "Actually, Prabhupada never appointed any gurus. He didn't appoint eleven gurus. He appointed eleven ritviks. He never appointed them gurus. Myself and the other GBC's have done the greatest dis-service to this movement the last three years (20 now!) because we interpreted the appointment of ritviks as the appointment of gurus".

Therefore you, Tamal Krishna Goswami, are the founder acarya of that bogus guru system carried on in Iskcon till this date. Since these heavy deviations introduced by you TKG, and supported by those other men, where never rectified in the beginning, that bogus guru system was passed on to the old GBC of 25 men. From there it was passed on to the so called "reformed GBC"? of a 50 men committee. From that fifty it went to the new gurus of a hundred, and from there, new appointed Swamis helped to create the manifold expansions of the presently run miss-kcon. Your motto, TKG, is this: "If only the majority of devotees are caught up in a bogus guru system, then it can not be challenged by those who think otherwise. This unauthorized guru system introduced by you, TKG, has been frantically maintained for more than 20 years now without being rectified by the GBC-body, because the GBC itself is being perverted and controlled by all of your self appointed bogus gurus and sub-appointees, who are betraying Prabhupadas ISKCON.

Now it is so deluded that it is very difficult to go back to the beginning, because many devotees were unwittingly compromised by their participation in an unauthorized system of guru appointments. My other complaint about you, TKG, is the death of a devotee from the Philippines, namely Achutagraja Swami, for which I personally hold you responsible. You have killed him indirectly by your bogus philosophy of "forced re-initiation." After you took over the Philippines by deceiving Hansadutta, you had nothing better to do than to force every devotee there to take re-initiation from you, or else be kicked out of the temple. Since Achutagraja Maharaj did not want to be re-initiated by you, he was forced to leave the temple.

Not being able to tolerate the separation from the devotees he fasted to death, because he did not want to go against Srila Prabhupadas instruction, which says: "It is always forbidden to take more than one initiating spiritual master." So why have you TKG, preached against Srila Prabhupada's instructions thereby introducing a bogus re-initiation system and trying to force Achutagraja Maharaj to become your disciple, thus causing his death? You could still have accepted him as your disciple by being his instructing spiritual master as explained in C.C.

Why are you stealing and killing disciples, thus going against Guru and Shastra? Achutagraja Swami's death shows how much you care for innocent devotees. My next complaint is about your disregard of Srila Prabhupada's instruction for carrying him on parikrama in the days prior to his disappearance, which I have personally witnessed. Shouldn't you fulfill the desires of the spiritual master? But to no wail you, TKG, tried very hard to overrule Srila Prabhupada, that he should not go on parikrama, even after Prabhupada argued, it would cure him.

After arguments where put forth and back, whether Prabhupada should go or stay, Hansadutta was saying that no arguments should be placed against Srila Prabhupada's instruction to go on parikrama. After every one left Srila Prabhupada's room to go outside for further discussion as to what should be done, you TKG suddenly screamed at Hansadutta, pointing your finger at him, yelling: "Yoouuuu want to kill Prabhupada, because he will die if he goes on parikrama".

That was your attack on Hansadutta. I was standing right in front of you two, just three feet apart, hearing, seeing and witnessing everything. Hansadutta, completely perplexed by your vicious attack just managed to justify himself by saying that Lokanath should at least make the bullock cart ready. But you, TKG, overpowered every one else. Your aggressive charge of: "You want to kill Prabhupad", is a simple trick of yours, just to make other devotees shut up.

You have done this to many other devotees also, just to discredit their integrity. Those so accused by you, have to first protest their innocence and in the mean time you can get through with your devious plans. It is interesting to note the smoke screen tactics of those who are devious. They will never give up and always attack others. Very clever trick indeed, but you forget one thing, TKG. When you pointed your finger at Hansadutta (and others), three fingers are pointing back at you.

If you did not kill Srila Prabhupada physically by administering poison, as some devotees suggest, then you have definitely killed him emotionally by denying him his last wish and will to go on parikrama. With your "living guru" concoction after his departure, you have killed him philosophically as well.

Even after 20 years I feel very bad to have witnessed this scene of yours, not being able to do anything about it. I expect a public apology from you and suggest that you renounce your artificially assumed and self-appointed guru position and return all those disciples of yours, whom you have stolen from Srila Prabhupada and return them to his lotus feet. Srila Prabhupada is not only the sampradaya-acarya for the next 10`000 years but also the real instructing and initiating spiritual master of all devotees to come.

If I have unintentionally committed any offences by writing this letter, then I like to beg forgiveness and ask to be corrected, for I am deeply concerned about the integrity of Srila Prabhupadas Society for Krishna Consciousness.

Yours, in the service of Srila Prabhupada, U. Das  [Urdhvaga Das]

(P.S. There is no need to write my full name, because you know who I am)

Please also see:
The solution to the ritvik debate
Why the Ritvik System is bonafide!
The Truth About Prabhupada's Ritvik Initiation System
Bill Of Indictment against Tamal Krishna Goswami