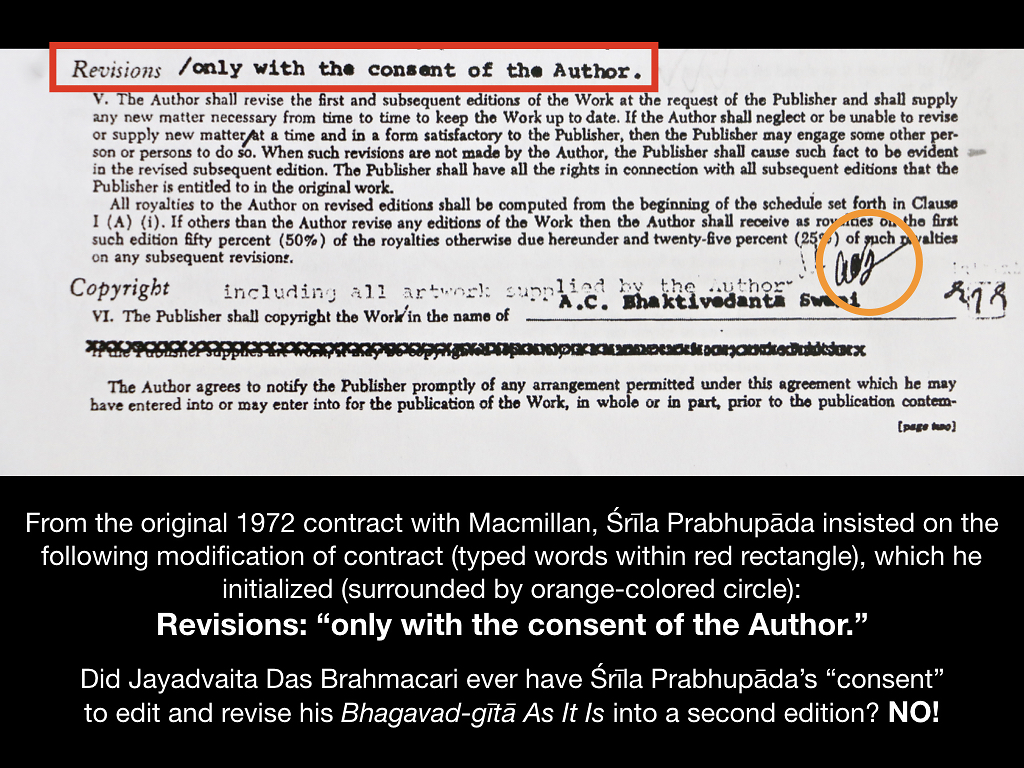 Śrīla Prabhupāda has been consistent over the years in his instructions on editing, that they should be, as he wrote in a letter to Rupanuga Prabhu in 1970: "Our editing is to correct grammatical and spelling errors only, without interpolation of style or philosophy" (Los Angeles: February 17, 1970). Almost exactly two years later, Śrīla Prabhupāda had his publishing contract with Macmillan Publishing Company modified under the revisions clause, no. V. to say that revisions were allowed only with the consent of the author, and he initialized this. Below is a copy of the actual contract:

From the original 1972 contract with Macmillan, Śrīla Prabhupāda insisted on the following modification of contract (typed words within red rectangle), which he initialized (surrounded by orange-colored circle): Revisions: “only with the consent of the Author.”
Did Jayadvaita Das Brahmacari ever have Śrīla Prabhupāda’s “consent” to edit and revise his Bhagavad-gTtà As It Is into a second edition? NO!

It is interesting to note that in the language of the contract within this clause it is stated, "When the revisions are not made by the Author, the Publisher shall cause such fact to be evident in the revised subsequent edition." The BBT/Jayadvaita Swami have neglected to declare all the revisions that were made as revisions of the editor and not the original author in the revised second edition of 1983.

Brothers and sisters in Krishna bhakti sevā reading this: Shortly I will be proposing to the BBT board to bring the BBT publishing and editorial standards to a new level of professionalism and devotional fidelity to Śrīla Prabhupāda's instructions on the matter. So far I have found my intereactions with BBT representatives very cordial and very conducive to dialogue, so I will keep pursuing this for the sake of bringing greater unity among the devotees and greater peacefulness in their hearts.

I should note that both Jayadvaita Swami and Dravida Brahmacari have both cut me off and refuse to discuss these vital issues that affect all of us. I'm sorry to have to report this. Dravida wrote the following to me:

After reading your "Commentary on 'A Note About the Second Edition,'" I'm no longer willing to speak with you.
Dravida dasa

I wrote back to Dravida inviting him to explain to me what he felt was incorrect or troublesome in any way with my commentary on the BBT83's "A Note About the Second Edition," and yet I've received no response since receiving his last words to me. However, I do find that the BBT Board is far more open to dialogue and progress. I will keep everyone informed of my progress as I am allowed to disclose such matters. I am hopeful that the very dedicated and thoughtful devotees who make up the BBT Board can envision a new BBT that embodies Śrīla Prabhupāda's instructions for editing and preserving his style and teachings with much greater professionalism, and a new BBT that inspires devotees to bring more and more of the world to Śrīla Prabhupāda's teachings by illuminating them.

Please also see:
Commentary on "A Note About the Second Edition"