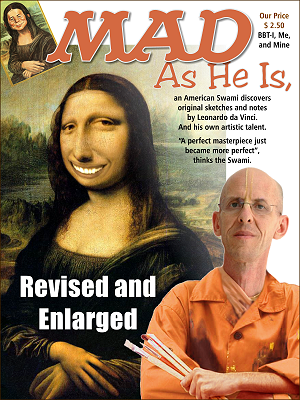 What would happen if someone would copy the original Mona Lisa picture and would claim that his picture now is the revised original from Da Vinci? It is weird to even think about such a deed, isn't it? But basically the same happens to Srila Prabhupada's very books. The Mona Lisa reviser would say, "I used the sketches from Da Vinci, I studied his other paintings, I was his assistant, I used better colors and better technics than the master, my picture is better than the original Mona Lisa." Then he would conclude: "I will continue to treasure the old Mona Lisa, but I will also continue to regularly look at the revised Mona Lisa, confident that her smiling reflects more closely what Da Vinci intended to draw." What would happen to such a guy? He would be a laughing-stock! "Call the madhouse! What a fool! What a rascal!", the people would say, "Da Vinci revised! Laughable!"

THE RASCAL EDITORS (Jayadvaita Swami), THEY ARE DOING HAVOC

Prabhupada: The rascal editors, they are doing havoc.
Yasoda-nandana: Sometimes they appeal that "We can make better English," so they change like that, just like in the case of Isopanisad. There are over a hundred changes. So where is the need? Your words are sufficient. The potency is there. When they change, it is something else.
Svarupa Damodara: That's actually a very dangerous mentality.
Yasoda-nandana: What is it going to be in five years? It's going to be a different book.
Prabhupada: So you... What you are going... It is very serious situation. You write one letter that "Why you have made so many changes?" And whom to write? Who will care? All rascals are there. Write to Satsvarupa that "This is the position. They are doing anything and everything at their whim." The next printing should be again to the original way.
Tamala Krsna: They should have a board of Satsvarupa and Jayadvaita.
Prabhupada: Hm.
Tamala Krsna: Those two men are both in Los Angeles now.

Prabhupada: So write them immediately that "The rascal editors, they are doing havoc, and they are being maintained by Ramesvara and party." (S.P.Conversation, "Rascal Editors,"June 22, 1977, Vrndavana)

Prabhupada: Change of government... Just like they say, a change of theories by the rascals. Change means rascal.
Harikesa: But as soon as a government changes...
Prabhupada: Anything change means it is the domain of rascals, pandemonium. Just like in Manu-samhita it is said that, nasyam svatantratam arhati, women should not be given independence. Once said, that is fact. If you want to change, you suffer. That's all. (S.P. Morning Walk December 14, 1975, New Delhi)

JAYADVAITA SWAMI ADMITS THERE IS NO AUTHORIZATION TO MAKE CHANGES

Vyapaka Dasa: “Do you have explicit instructions from Srila Prabhupada authorizing you to make post-samadhi changes to his books?”
Jayadvaita Swami: “No.” (Published e-mail correspondence between Jayadvaita Swami og Vyapaka Dasa)

Dravida dasa: “Dear Yasodanandana Prabhu,
Please accept my humble obeisances. All glories to Srila Prabhupada!
In answer to your questions, I don’t have any original tape recording of any kind of Srila Prabhupada authorizing the editorial changes in the Gita. And despite scouring the GBC resolutions from 1979-83, I found no reference to the Bhagavad-gita whatsover. It seems the assignment of Jayadvaita Swami to perform that task was unpublished–at least I couldn’t find it in the GBC resolutions made widely available.

So both Jayadvaita Swami and Dravida Dasa, who are the leading editors for the BBT International admits there is no instruction from Prabhupada to edit his Bhagavad-gita, As It Is (or any other of his books).

A QUESTION OF AUTHORITY

It has been admitted by these revisers, that Srila Prabhupada never asked to re-edit and it is generally known, that His Divine Grace always opposed needless changes and became very furious when some change-vadis tried to "enhance" his books.

"To my knowledge, Srila Prabhupada never asked us to re-edit the book.
As you know, and as we kept in mind while doing the work, Srila Prabhupada staunchly opposed needless changes."
(Jayadvaita Swami's Letter to Amogha Lila 1986)

Srila Prabhupada didn't want his books revised. But the reviser knows better? More than once he uses the phrase that a modification is "100% justified". There is not even a GBC resolution about the revision of Srila Prabhupada's books! Nobody cares? The books of Srila Prabhupada are the very foundation of ISKCON! Srila Prabhupada never said, that his books have to be re-edited according to his other books, the manuscripts, tape recordings & etc. What to say on the basis of grammatical grounds, modern English, the editor's questionable views & etc. There is NO AUTHORIZATION to revise the books!

WHY THE ORIGINAL EDITIONS ARE THE BEST TREASURES FOREVER

WHY THE REVISED EDITIONS ARE BUILT ON SAND

1) ...don't have the authorization and order of Srila Prabhupada to (repeatedly!) revise his books.
2) ...are members of a dark and ailing ISKCON, the sinister movement, buried in scandals and deviating in so many ways.
3) ...are followers and supporters of horrible impostors and deviants.
4) ...lost their connection to Prabhupada, thinking him to be dead or someone like a ghost.
5) ...rely on old, barely audible tape recordings and old transcripts.
6) ...don't know about all the verbal instructions to the editors of Srila Prabhupada.
7) ...don't have all recordings and transcripts available.
8) ...are offending Srila Prabhupada with their falsification work and the various justifications for their unauthorised book changes.

The revisers themselves have to admit that the original editions are treasures; these editions are eternal, wonderful, they are working and therefore there can't be a true need nor an authorization for revision. This means that they themselves admit doing something unnecessary. And worse: They are causing so much trouble and loss with their needless activities, even for true blue ISKCONers.

The revised books are NOT better, NOT needed, NOT ordered and they bear THE STIGMA OF DOUBT, for the revisers and their revisions are NOT PERFECT, as admitted by Dravida himself. The original editions are approved by Srila Prabhupada and therefore they are beyond any doubt and this is very important.

"But ignorant and faithless persons who doubt the revealed scriptures do not attain God consciousness. For the doubting soul there is happiness neither in this world nor in the next." [Bhagavad-gita, 4.40 (original edition)]

The book revisions cause so much trouble. And we don't know what's to come next.

Because the BBT books were wrongfully revised...

1) ...the devotees are forced to print and to publish the original editions of Srila Prabhupada's books themselves. This produces loss for the BBT and hampers its ability to publish big books, new first class translations of vedic scriptures and to build new temples.

2) ...the BBT lost millions in useless and offensive court cases, wrongfully trying to stop the bona fide publications of the devotees.

3) ...the devotees and Prabhupadanugas can't and don't want to buy and distribute this changed books from the BBT. But they would distribute tons of books if the books were bona fide originals, even if they are not willing to obey to the deviations of the GBC. Again millions and millions are lost for the BBT. And millions of books aren't distributed.

4) ...thousands of devotees are forced to look into this hurting and disgusting book revision issue.

All this is completely unnecessary. The original editions are OK. They are bona fide, they are treasures, everyone loves them and is happy with them. IS IT REALLY WORTH to cause all this loss and trouble and risk the own spiritual life for some most questionable revised editions? It is said "by their fruits ye shall know them" and the fruits of the revisions are very bitter and unpalatable as demonstrated above. And we did not even consider all the side effects like diminishing book sales.

It is fascinating to see how people are 100% sure to do the right thing, the good thing, but IN REALITY they give rise to the completely opposite effect. This is a common disease in our world. And there are many examples for this in history. But as devotees we should be able to check this, question our own activities, sincerely JUDGE BY THE RESULTS and CORRECT THE SITUATION.

It's simply the reputation of a few revisers who did something needless without authority. Even their reputation could be saved, if they would humbly correct themselves.

CONCLUDING WORDS TO THE REVISER

Stop revising the books and return to the originals. Stop hurting yourselves and others. Can't you see that you are digging your own grave; a dark, cold and clammy one? A grave with the revised books as tombstones which nobody wants to visit. When the people pass by they would look at it with disgust and tell their children to avoid it. Don't grow the man eating plants from change-vadi loka in your garden. First they may look like the bhakti-lata, but as soon as they start to bite you and the innocent pilgrims, one must remove them. Otherwise they will prepare to have a big lunch soon and you'll be lunch No.1. Simply publish the original treasures. So many people are in need of this true jewels. Why not use your learning to write and edit your own books? Who wants you to risk your spiritual life with needless and not authorized revisions? Who is this bad adviser? Better not to listen to him.

"So, when you change, then the authority is lost. Just like in our society, sometimes they do something nonsense and they say, 'Prabhupada said.' (laughter) They are doing that. We know that. It is deteriorated like that. Therefore Krsna said, sa kaleneha mahata yogo nastah kaunteya: 'And in due course of time, this yoga was lost. Therefore I am repeating the same thing, old philosophy to you.' So it requires like that." (750509rc.per Conversations)